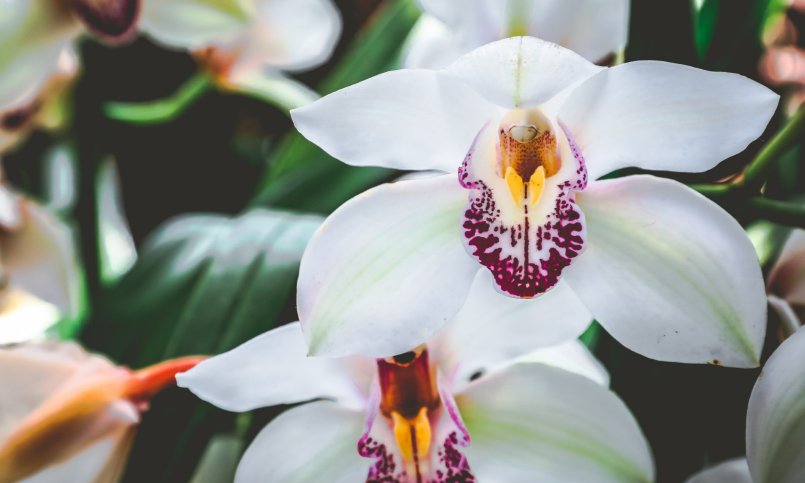 Cymbidium orchids, more commonly known as “boat orchids” due to the shape of their flowers, are one of the most popular types of orchids for gardeners.

They’re available in a wide variety of species, so there are many options for orchid enthusiasts. They are also easy to care for and can even be grown outside in the right climate.

Cymbidium orchids are prized for their elegant beauty and the wide variety of colors they can be found in. Aside from being attractive houseplants or additions to the garden, they’re often used in cut flower arrangements or in corsages. One particular variety of boat orchid is also considered to be a delicacy in Bhutan.

The boat orchid naturally appears in tropical and subtropical Asia, and Australia. It was first described by botanist Olaf Swartz in 1799. Boat orchids can have a life span lasting decades. However, the exact amount of time an orchid will live depends significantly on several factors. This includes the particular species, where the plant is grown, whether it’s introduced to any diseases, and how it’s cared for.

Cymbidium orchids are easy to recognize by the shape of their flowers. Each petal is long and separated from the others. In the middle of the flower, the labellum looks like a cup or boat, giving the flower its name.

Boat orchids have long green leaves, and each stem will grow between 10 and 25 flowers at a time, making them very dramatic-looking plants. The stems themselves are long and pale green.

These orchids come in a wide range of colors. In fact, you can find them naturally in nearly every color except blue. Some of the most common colors are white, red, and yellow, with flowers in variegated forms of these colors being quite common and popular.

Cymbidium orchids exist in both standard size and miniature forms. Mini cymbidiums generally grow to only between four and eight inches in height, so they’re the perfect size for a smaller space. The flowers are tiny and very delicate, but the plants themselves aren’t as dependent on cold weather for their blooming cycle as the standard size varieties.

Cymbidiums, unlike many other orchid species, work well as an outdoor plant. If at all possible, it’s best to grow them outside from late spring to early fall.

Cymbidiums require a great deal of light and, as long as they don’t get sunburn, can withstand full sun. During the day they should have as much light as possible, with shade only in the warmest part of the day. When growing them inside, place them in an east-facing window if possible.

You should water your boat orchids in the morning with lukewarm water. Try to keep your potting medium damp. Watering once a week is a decent general rule of thumb, but how often to water depends on the plant and the plant’s location. In the warmer months, watering can occur slightly more frequently.

It can also be beneficial to spray the leaves of the plant with a fine mist of water once or twice a month. Distilled water is a better choice for watering cymbidium orchids.

These orchids prefer an environment with about 40 to 60 percent humidity. Indoors, a humidifier can help to increase humidity. However, it’s also essential that, in high humidity areas, the area around the plants has good airflow, to prevent rot and disease.

Boat orchids do best in a slightly acidic, water-retaining potting medium. Fir bark mixed with peat moss is a popular choice. You can also incorporate loam, redwood fiber, and dried oak leaves into the medium.

Cymbidiums do best when they are undisturbed, so it’s best to choose a clay pot that will allow for about two years’ growth. Boat orchids actually bloom better when they are in a tight pot. Don’t allow them to spread out. When repotting does become necessary, repot during the spring, or after the plant has flowered.

Cymbidiums are sympodial orchids, which means they have pseudobulbs. It also means they can propagate through division. During repotting, split larger or older plants into sections three to four inches long, with three healthy pseudobulbs each. Each section can be repotted and will become a new plant.

When repotting a cymbidium, make sure not to bury the pseudobulbs under the potting medium.

Boat orchids generally bloom in early spring, when night temperatures are cooler. However, some varieties may bloom in the autumn months instead. How long the blooms last depends on the specific species, but generally, the flowers will remain for several weeks, and may even stay for up to two months.

Once a stem has bloomed, it will not flower again. It’s important to trim away dead stems periodically to encourage more flowers the following year.

Unfortunately, cymbidiums are susceptible to a variety of diseases.

Cymbidium mosaic virus is one of the most common conditions the plant encounters. Interestingly, this virus only occurs in cultivated orchids.

Some of the symptoms of the mosaic virus are white or yellow spots or rings on the plants or brownish areas that look like bruises. Infected plants will also produce fewer flowers and may not grow as well.

Another common cymbidium disease is the odontoglossum ringspot virus. This looks quite similar to Cymbidium mosaic disease, in that it can cause brown patches on the leaves and flowers of the plant.

There are no cures for either cymbidium mosaic disease or odontoglossum ringspot virus. Also, healthy plants that are not displaying symptoms can sometimes be carriers of either disease and can thus spread it to other plants. For these reasons, prevention of disease and preventing the diseases’ spread are the best options.

If you want to prevent diseases, it’s crucial to ensure that plants have good airflow around them. It’s also important to sterilize all cuttings and to use clean, sterile tools when trimming or propagating the plant.

Boat orchids are also susceptible to bacterial infections, as well as to mites. You can prevent mites by frequently misting the undersides of the plant’s leaves.

Scroll back to top Brilliant Orchids