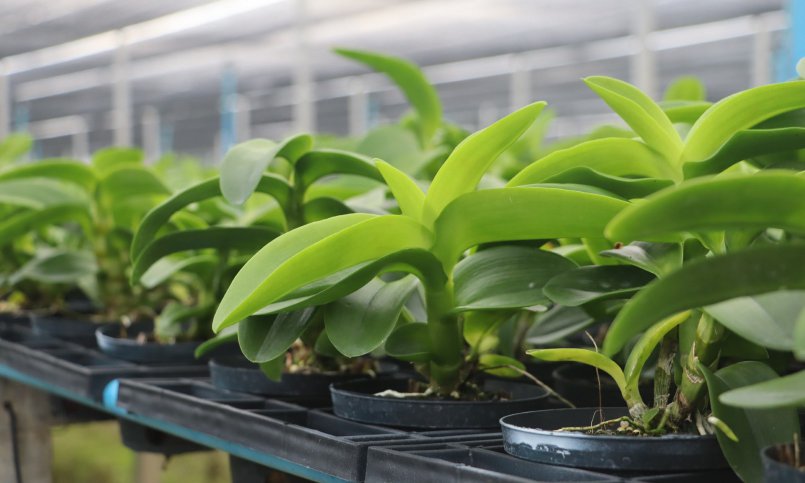 Ever wondered how long your orchid is meant to last? Well, with the right care, orchids can live for several decades, and some specimens are known to be well over 100 years old!

This can be surprising for some people, especially those who aren’t familiar with the difference between a dormant orchid and a dead one. While the flowers will only last a few weeks, it’s important to continue caring for your orchid in its dormant phase. Maintain it well, and your plant will give you many more years of blooms.

Let’s dive a bit deeper, so you can learn how long to expect an orchid to live, and how to maximize its lifespan.

Contents hide
1 Lifecycle of Orchids
2 Growing Orchids Indoors vs. Outdoors
3 Maximum Lifespan of Orchids
4 How to Make an Orchid Bloom

The lifecycle of an orchid consists of five distinct stages of development. These are very similar to many other plants, and in order, these are germination, growth, flowering (blossoming), fruiting, and seed dispersal.

The cycle continues annually as new seeds are dispersed from the flowers. The seeds are then germinated and grow into new orchid plants. They are hardy plants that have reliable lifecycles.

Orchids are easy plants to keep indoors and are traditionally thought of as an ornamental houseplant. They make beautiful potted plants that are pretty low-maintenance. Growing them indoors is actually the preferred method if you live in a warm or hot climate.

However, orchids can also grow outside under the shade of lofty trees. In fact, if you are in a cooler climate, then orchids thrive when growing outdoors.

Orchids grown indoors will flourish and bloom each year as long as you water them properly. Those growing outdoors will still prosper, but there are more threats from pests and other external factors.

So it’s likely that your orchid will live longer indoors, on average.

Basically, as long as something does not kill the main structure of the orchid plant, these resilient plants can live indefinitely. It is not uncommon for an orchid plant to live beyond one hundred years or more.

That said, there are some threats to the plant that will halt its growth or even kill it. These may depend on the type of orchid you own.

Let’s take a look at some of the most common types of orchid.

The Phalaenopsis orchid is a popular type of monopodial orchid. This means the orchid has a central axis around the stem and throughout its life, leaves will grow from the top of this shaft.

The lower leaves may begin to shed, but this is natural since these types of orchids continue to regenerate throughout their life. The axis will also continue to grow, as well as new leaves, and roots of the plant will grow indefinitely.

A significant threat to this orchid is what’s called a terminal spike. If a terminal spike appears on the orchid’s axis, then new leaves will not continue to grow, but the plant will still live on.

Cymbidium orchids have a hard portion called a pseudobulb. These are also known as flower spikes that emerge along the central axis of the stem. This protects the blossom and leaves of the plant, making the orchid more resistant to pests and disease.

These plants rarely have to deal with any major health issues.

Dendrobium orchids are among the most adaptable plants in the entire plant kingdom. Their roots creep over boulders, trees, and other surfaces. Like Cymbidium orchids, Dendrobiums have pseudobulbs that protect their leaves and seldom have issues with continued growth.

So, in summary, most types of orchids can live for a very long time. That is, as long as you care for the plant and don’t neglect it. Keep it safe from pests and water it correctly, and it should grow and prosper for many years.

However, the Phalaenopsis orchid can encounter issues such as terminal spikes, which you have no control over. Orchids that have pseudobulbs such as Cymbidiums and Dendrobiums tend to adapt well to any kind of environment.

How to Make an Orchid Bloom

Many orchid growers think that when the blooms fall off, then the plant is dead or dying, but this is not true!

This is just a natural phase of the orchid known as the dormant season. The season usually begins in August and lasts until January. The blossoms will be back around February or March, so just be patient, and they’ll come back.

If you don’t want to wait, there are some nifty tips to help you get your orchid to bloom again.