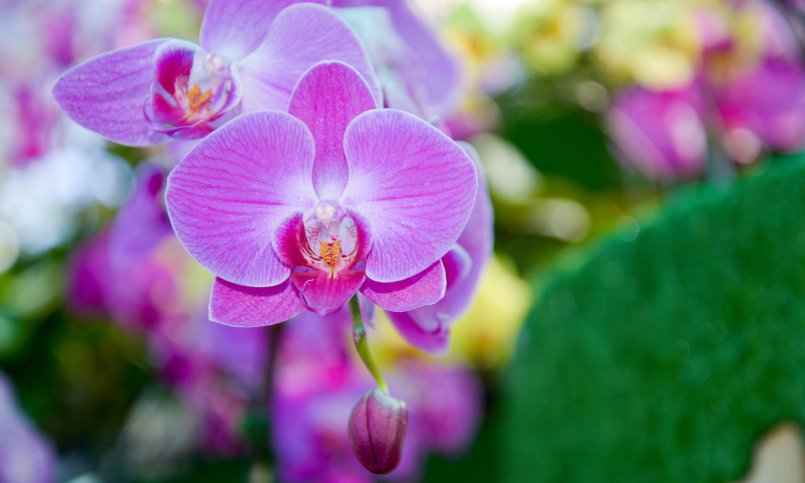 If you’re looking for a beginner’s introduction to orchids, the Phalaenopsis or Moth Orchid is your best bet. These orchids are extremely popular with homeowners because they’re easy to grow and bloom frequently.

Here’s everything you need to know to grow a beautiful and healthy Phalaenopsis that will last years and years.

What is a Phalaenopsis orchid?

The Phalaenopsis orchid is a genus of orchid that contains about 70 different species. This particular orchid species is native to India, China, Southeast Asia, New Guinea, and Australia. However, the most variety and largest populations are found in the Philippines and Indonesia.

One of the prominent features of this particular genus is the unique shape of the flower, which looks like the wings of a flying moth.

This genus was first originally and formally described in the early 1800s by Carl Ludwig Blume. It has the name Phalaenopsis because of its shape and flower form. Phalaenopsis comes from the Ancient Greek word phalaina, which means “a kind of moth,” hence the nickname “moth orchid.”

Phalaenopsis orchids have coarse, long roots. They have short, leafy stems, and flat flowers that bloom near the end of their flowering stem branches. The leaf bases can often overlap one another, which can give it a much more abundant appearance. The leaves themselves are usually large and leathery-looking.

The flowers have their petals spread widely apart, also creating a much larger and fuller appearance. This natural play on size is just one of the main reasons that people fall in love with them.

With over 70 different species falling into this particular genus, it’s crucial to know what you have or what you want to buy.

Here are some of the most popular and common Moth Orchids that you might come across during your search.

These are some of the more commonly seen species, but there is also a wide array of other variants for you to choose from.

What colors do Phalaenopsis come in?

Phalaenopsis orchids are very varied, and first-time orchid growers are often amazed at the number of colors they can come in. You can expect to find them in white, yellow, pink, fuschia, purple, or even spotted and striped.

However, the most popular colors (and the easiest to find) will almost always be white and purple. These have been among the most desirable color choices for owners and breeders alike for hundreds of years.

How to care for a Phalaenopsis

Many beginners are overwhelmed and frightened off by the sensitivity of orchids. However, once you actually understand what your orchid needs on a daily and weekly basis, you’ll feel more confident caring for it.

Here’s a helpful guide that you can use to ensure that you’re giving your Phalaenopsis everything it needs to thrive.

For your orchid to really do its best, one of the first things you’ll want to make sure of is that it receives bright, but indirect sunlight. This is because it enjoys the warmth that the sun can bring, but can burn under direct light.

These orchids typically grow underneath larger trees in more forested areas. The best place for them is next to an eastern or western facing window. This ensures that they never get more than two hours of direct sunlight per day.

Temperature-wise, the Phalaenopsis is a particularly easy-going plant and can even withstand temperatures up to 93 degrees Fahrenheit. However, you’ll want to make sure it stays within the ideal temperatures of 68 and 73 degrees.

Also, these orchids tend to grow close to rivers and streams in warmer, more humid climates. This means that you’ll want to keep your orchid in an area of about 50% humidity. An easy way to achieve this in most homes will be to keep a water base such as a pan or plate close to your orchid. The water can consistently evaporate and create the perfect mini-environment for them.

Another important factor that you’ll need to take into consideration when caring for your orchid will be what you decide to place it in. Orchids can be especially picky when it comes to their pots and potting medium. In fact, putting them in the wrong sized pot can be all it needs to fail.

For Phalaenopsis, you’ll want a pot that’s able to support its longer stem without being too large to leave them feeling insecure. Typically, these orchids are sold in pots between 4 and 6 inches in diameter. This is often the perfect sized pot for your orchid unless you’re hoping for it to grow to a larger size over time.

The material you place your orchid in will also make a big difference to its health. Phalaenopsis like their roots to be free to wrap around their surroundings. This means that you’ll want to find a potting medium that allows for free airflow and movement. Bits of bark or peat moss will be the ideal materials in these cases and can often be found in your local nursery or online supplier.

For most beginners, the trickiest part will be watering. How much water does your orchid need? When is the best time to water them?

Well, in fact, every orchid type is different. You’ll need to make sure you aren’t overdoing things if you expect your plant to flourish. Unfortunately, for the Phalaenopsis genus, there really is no one right answer. The amount you need to water will depend on several different factors.

First, you’ll need to take into account the drainage of your pot, how dry your home is kept, your potting material, and the temperature of your home. However, generally speaking, if you’ve planted your Phalaenopsis in bark, you’ll want to try and water it about once every seven days.

Make sure you feel your bark and test its dryness. If your bark is bone dry, then you’ll want to soak your orchid for about 10 minutes, allowing the water to really get into the bark as well as the roots.

However, if your orchid potting medium is still somewhat moist, simply pass some water through it until it fills the bottom of your drainage plate.

When to Repot a Phalaenopsis

Your orchid is a living and hopefully thriving plant, and so some growth should naturally be expected. However, many first-time growers are surprised that they may have to repot their Phalaenopsis to have it continue doing well.

To repot your Phalaenopsis correctly and without damaging the plant, you’ll need to take a few factors into consideration.

First, you’ll need to be able to recognize when your orchid needs to be repotted. As a general rule, Phalaenopsis should be repotted every two years. However, there are a few warning signs you can also look out for.

One of the most obvious will be when the lower leaves of your plant start to die. This will make your orchid especially weak and easily damaged.

Another sign will be when the potting medium you’ve planted it in starts to decompose and become fine and gritty. Whenever you notice this happening, it’s time to start looking for a larger pot.

However, you mustn’t try and repot your plant during its blooming season. This will result in all the flowers falling off and possibly harming your plant in the process. The best thing to do is wait until your plant finishes its bloom before you repot.

Once you’ve determined that it’s the correct time to repot, you’ll need to take a few necessary steps to complete the process. This means purchasing a new, slightly larger pot as well as new potting material. If your plant did well in the park or peat moss medium already, then stick with this same material. The fewer changes your orchid has to go through, the better.

To repot the plant, the first thing you’ll need to do is carefully remove the plant from the original pot.

Gently grasp the orchid by the stem and carefully maneuver it out of the pot. You can use rubber gloves for this if it helps. Once the plant is out of the pot, make sure you remove all the old potting material from around the stems and roots.

Once you’ve done this, you’ll want to remove any dead and dying leaves from the bottom of your plant. Keep in mind that it’s totally normal for orchids to lose two leaves every year from the bottom of the stem so that two new leaves can grow on top. You’ll also want to remove any dead roots that you see so that the new space can be taken up by healthy and thriving roots.

Once your plant is ready, it will be time to place it into the new pot with fresh potting material. Make sure to water your orchid thoroughly after you repot so that the potting medium and roots can absorb all the water they need.

It’s really not as hard as it looks, and just remember that practice makes perfect!