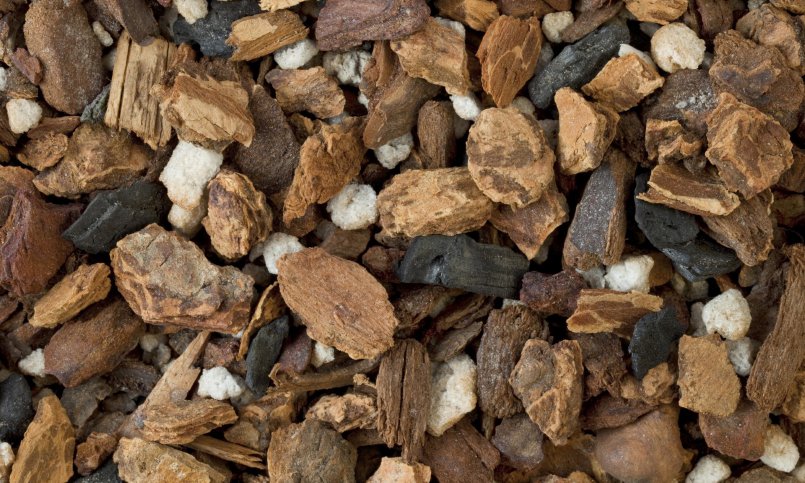 Orchids are actually not that challenging to care for. However, their stunning good looks and unique care needs can make it feel like they are for advanced gardeners only.

It often surprises new orchid enthusiasts to learn that orchids are among the few plants that don’t need soil!

In fact, according to the American Orchid Society, planting an orchid in soil is the fastest way to harm or even kill the plant.

If you ever have the good fortune to see wild orchids growing, you’ll notice them happily clinging to tree trunks and branches – without a scrap of soil in sight. These orchids are technically called “epiphytes” (air plants).

You may also notice orchids clinging to rocks. These orchids are called “lithophytes” (rock plants).

Other orchids choose to grow in the highly porous and diverse media found on the forest floor. These orchids are “terrestrials” (earth plants).

Most commercially available orchids are of the terrestrial type. What these orchids need instead of traditional soil is the right potting mix or medium, that more closely replicates what they would find on the first floor.

Did you know that there are more than 20,000 known species of orchid and even more hybrid varietals?

While special orchid mix blends may be marketed as “orchid soil,” it’s important to know there isn’t any actual soil in orchid mix.

This is actually one of the most challenging aspects of orchid care to master, even though it essentially boils down to semantics.

Soil is dirt. Potting mix is not soil or dirt. Soil has properties that tend to pack closely around the plant roots. This is the exact opposite of what orchids need to survive, let alone thrive.

Even if you have some potting soil on hand, never use it for orchids. When soil packs around orchid roots, it cuts off the airflow that the roots need to pick up nutrients. Simultaneously, it traps moisture too near the roots, and this can cause root rot.

Many different types of orchid potting mixes exist. Most are combinations of bark and moss, bark and synthetics (Perlite, vermiculite, etc.) or all three.

The best potting mix for your orchid will absolutely depend on the size, health, and species of orchid.

Bark is an optimal medium to use for potting orchids. It is more porous than soil and also larger and chunkier to permit better airflow and moisture drainage – two things orchid roots crave.

However, it also tends to break down (decompose) more quickly than soil and other types of orchid potting mix. This can be a problem when decomposition attracts microbes that can do damage to orchid roots and lead to root rot.

Bark is typically sold in grades from fine to coarse and small to large.

As a general rule of thumb, finer, smaller bark mix is better for seedlings and moisture-demanding orchid species. Large, coarse bark mix is best only for large established plants which can withstand more dryness between waterings.

The most popular types of orchid bark mix include fir, tree fern, pine, and redwood.

Although redwood is an excellent hardwood for growing orchids, it is notoriously tricky to find.

Pine is more readily available but is a softwood and thus not as resistant to retaining moisture around orchid roots, which causes root rot. It should not be your first choice.

Fir is a solid choice overall. Aim for a medium-grade, mid-size bark for a small-to-medium established terrestrial orchid plant.

Tree fern fiber is also a great choice with similar properties to regular tree bark when used as an orchid potting mix.

It has comparable moisture retention to fir and a similar decomposition period. This means it is necessary to keep an eye out for root rot.

Seramis is a type of clay potting mix. You can use it on its own or mixed with bark, as one orchid enthusiast describes it.

There are two kinds of peat moss: sphagnum and German.

Sphagnum peat moss is not regarded as suitable for potting orchids long-term. But if you have some lying around it can be useful on a short-term emergency basis.

The reason orchids often fail to thrive when potted in sphagnum peat moss is that this moss is more finely grained and will clump under high moisture conditions. This clumping quality can then prevent the air circulation orchid roots need.

The latter is a better choice for a potting mix for orchids. It retains moisture well without impeding water drainage or crowding an orchid’s delicate roots. It is also slow to decompose so you can take longer between repotting.

Osmunda fiber, or osmundine as it is sometimes called, comes from the roots of the Osmunda fern plant.

It’s fantastic for potting orchids, so much so that one of its nicknames is “orchid peat.” But it is tough to obtain today.

Osmunda fiber is still the medium of choice for epiphytic orchids when available.

For example, the popular Phalaenopsis (aka “moth orchid”) is what is called a monopodial orchid. It has a single main stem from which the surrounding leaves and flowers sprout. Its roots are moisture-loving but hate being too damp.

The best potting media for a moth orchid will be a combination of moss, bark, and synthetics to retain moisture without damp and avoid crowding the roots.

Cymbidium is a very popular terrestrial orchid that can withstand a slightly heavier orchid potting mix but cannot tolerate standing water. A combination of bark, synthetic, and coconut coir is optimal for this type of orchid.

Where to Buy Orchid Potting Mix

Many online and local resources exist for locating the best orchid potting mix for the species you want to grow.

The American Orchid Society can be a great resource to find less common potting media and to get advice from experienced orchid growers.

How to Make Your Own Orchid Potting Mix At Home

If you are not able to find the precise blend in a ready-made commercial product, you can whip up your own orchid potting mix at home fairly easily.

Also consider the size, age, and growing type for the orchid you are potting. Smaller, younger seedlings and plants will do well with finer material. Older, larger plants tend to favor a more coarse mixture.

To achieve this precise blend of traits, you will likely want to combine more than one media together, such as one-part bark, one-part synthetic, and one-part moss.