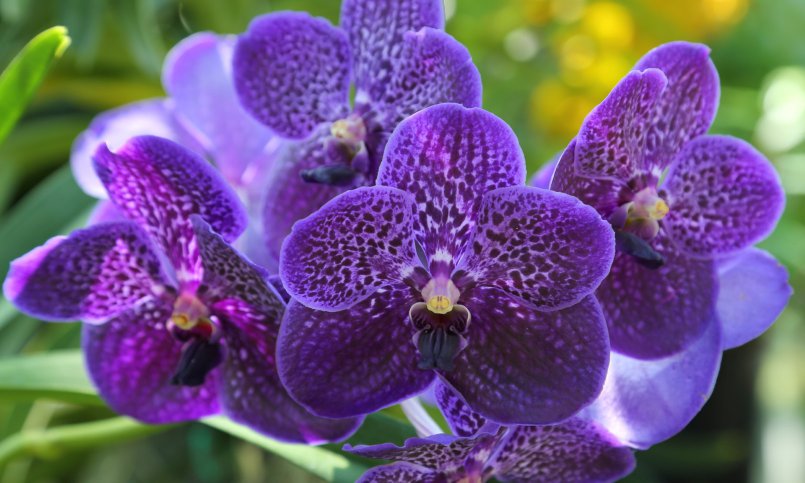 Vanda orchids are a popular choice for gardeners because of their brilliant, abundant, and fragrant blossoms. They are one of the few orchid varieties that can naturally produce blue flowers.

These orchids have unique growing requirements, but caring for a Vanda is, once understood, quite straightforward. As always, our starting point is to take a look at their natural habitat. Then we will know how to provide a similar environment in our own home.

Vanda orchids occur naturally in New Guinea, some islands in the western Pacific, and in East and Southeast Asia. They’re often found in the jungle, so they are used to humid, tropical environments.

Most Vandas are epiphytes. This means that in the wild, they tend to grow in gaps or crevasses in tree bark, or in the joints of tree limbs. However, they’re sometimes found growing on rocks too.

This type of growing environment can be mimicked in cultivation to keep the plants happy and healthy.

How to Care for a Vanda Orchid

Now that we know what a Vanda’s natural habitat looks like, we can break this down into a few different aspects.

In general, these orchids require a lot of light. Exactly how much light a Vanda orchid requires depends mostly on the species and the type of leaves the plant has.

Vandas can have three types of leaves, depending on the species:

Plants with strap leaves or semi-terete leaves need partial shade and protection from the sun during the warmest parts of the day. Those with terete leaves prefer full sun.

If you’re keeping your Vanda orchid indoors, place it by a south-facing window, if possible.

Related: How Much Light Do Orchids Need?

Although they can tolerate slightly colder temperatures, it is not optimal, and temperatures should not drop to below 55 degrees Fahrenheit.

These orchids thrive in a high humidity environment. Remember, they come from a tropical natural habitat. Humidity levels of 50 percent and greater are best, with a humidity level of 80 percent considered ideal.

You can raise humidity levels using a humidifier or grouping plants together. Be careful – it’s also essential to maintain free airflow around the plants to prevent rot and bacteria.

Vanda orchids should be watered frequently, especially during the spring and summer months, which is the growing season. In autumn and winter, watering can be reduced.

The roots should remain moist but should never be soggy. A well-draining, loose potting medium can aid in keeping the roots dry.

You should choose a coarser mix that drains well, such as large pieces of fir bark. Alternatively, you can use a charcoal medium or a gritty soil that retains little water.

These plants grow from a single large stem and generally have a substantial aerial root structure. As a result, they thrive in loose net pots, or in hanging baskets.

Hanging Vanda orchids is popular not only because it makes for an attractive display, but also because it is a more natural environment for the plant.

A basket with slats can simply be hung from a beam or ceiling, and the plant can be placed inside. Exposing the roots to the air actually benefits the plant’s growth.

Another option for hanging Vanda orchids is mounting them to driftwood. Plants can simply be tied gently to driftwood, and the wood can then be hung using eyehooks. To water, the entire piece of driftwood, including the plant’s roots, can be dipped in a bowl.

When placed in a basket, Vanda plants can be left alone for years at a time without repotting. They only need repotting about once every two years, although some sources suggest every year as a better timescale.

Before repotting, soak the plant’s roots in water to make them more pliable. Trim away any dead or rotting roots, place the plant in a larger basket or clay pot with new potting medium, and allow it to remain dry for several days before watering again.

Vandas are among a handful of orchids that can produce truly blue flowers. For this reason, they are prized by gardeners interested in creating hybrids.

They feature large, brightly colored blooms with rounded petals, and grow to a variety of sizes, depending on the species.

These orchids come in many colors, including white, orange, pink, and red, and any mixes of these colors. However, the most popular and often the most visually appealing colors are purple and blue. These can range from lighter shades to dark, vibrant ones.

Vanda orchids bloom frequently (generally, every few months) and, depending on the species, can bloom at all times of the year. The blooms themselves can last anywhere from a few weeks to a month or two.

These orchids can benefit from occasional, careful pruning. Trimming back the old stems will encourage the plant to bloom again during the next flowering cycle.

Once a stalk has finished blooming, cut it back as far as possible. When trimming the plant’s stems or roots, always be sure to use a sharp, sterilized knife or pair of scissors to minimize damage to the plant and reduce the risk of transmitting diseases.

Here’s a quick recap of all the different care aspects:

This genus is quite diverse, with about 80 different species. Common species include:

Do you love these orchids as much as we do? Let us know about your experiences growing Vandas in the comments below.

Scroll back to top Brilliant Orchids