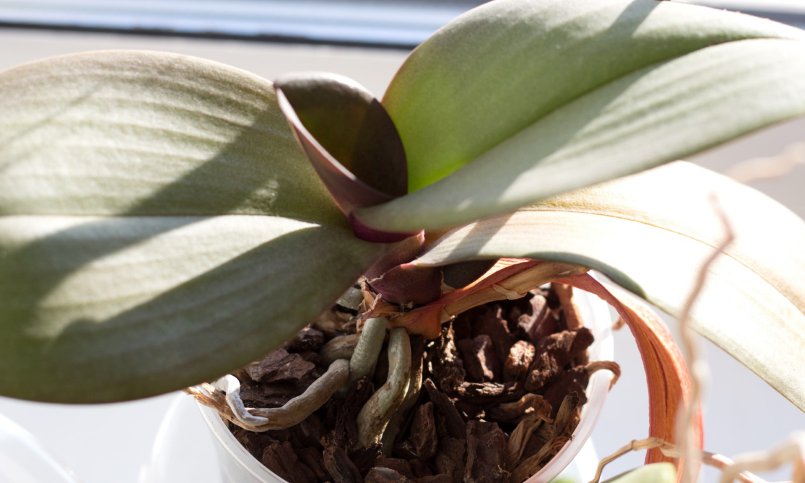 There are only a few ways in which an orchid can tell you that something is wrong. One of these is wrinkled leaves, and it’s essential for your plant’s health that you learn how to fix this.

Learn to watch your orchid’s leaves closely for signs the plant isn’t getting the care it needs. If caught in time, it’s generally possible to fix wrinkled orchid leaves.

Before you can identify problematic leaves, you first must learn what healthy leaves look like on an orchid plant.

While other plants may display quite dark or light green leaves, a healthy orchid leaf is always going to be a bright olive green color.

Healthy orchid leaves should also be plump and buoyant, extending out from the stalk without aid.

This is all about matching the symptom to the solution. Each of these symptoms can typically be remedied by taking certain specific care steps.

When an orchid’s leaves grow limp, the typical solution leads back to improper watering.

If you want to diagnose whether the issue is over-watering or under-watering, it is helpful to examine your orchid’s roots.

Dry, wrinkled, brittle, or shriveled roots may indicate under-watering. Brown, mushy, soggy, or rotted roots can mean you’re over-watering. In the latter case, there could also be a secondary issue developing with root rot, a common orchid fungus.

However, in either case, the end result is that no water is getting from the roots to the leaves.

The first thing to do is to avoid removing the wrinkled orchid leaves even though they may look unsightly. They may still be helping the plant in other ways to gain nutrients and protection.

Instead, do your best to gently remove dead or rotted roots, using sterile scissors to do so. Apply sterilizing solution over the wounds and repot in fresh, sterile potting media.

Adjust your watering according to your healing plant’s needs and supplement with extra humidity, which your orchid can take in through the leaves until the roots heal.

Make sure to read our watering guide and you’ll have no problems!

If the leaves are leathery, this is commonly another sign of a watering problem.

This can happen when the orchid isn’t getting enough water or the roots are compromised so that they cannot take up sufficient water to send to the leaves. A leathery, dehydrated appearance is often the result.

Another common cause of leathery orchid leaves is disintegrating potting media.

In either case, it is essential to use sterile tools to remove any dead or rotted roots and then repot your orchid in fresh, sterile media. Increase the ambient humidity and adjust watering as needed based on the underlying cause.

One of the most frequent culprits in the case of curly orchid leaves is using the wrong potting media or leaving your orchid potted in disintegrating potting media.

Novice orchid growers, in particular, may not yet realize orchids don’t grow in traditional potting soil, which crowds and suffocates the roots. Switching to an orchid-appropriate sterile potting media may cure this issue.

Another common cause of curling leaves is pests. Microscopic pests like aphids or fungi like Fusarium wilt can cause leaf dehydration, which in turn causes wilting.

You can remove aphids and other small pests by hand or using a forceful water spray. Fungi typically require sterile removal of the infected areas and repotting in a sterile potting media.

When your orchid’s leaves start to turn brown at the tips, the most likely cause is either over-fertilization or fungus.

Here, repotting in a sterile potting media will be necessary no matter which it is. If the root cause is a fungal infection, you may need to use tools to excise the infected areas before repotting.

While most orchid species are not as difficult to care for as their reputation might suggest, they can still put you through a learning curve.

These are similar issues that many growers face in the course of learning to care for their plants.

When an orchid’s root system has gone without adequate hydration for some time, the roots will start to shrink, wither, and dry out.

If the area is humid, the leaves can take in some moisture. As a result, it can take longer for you to notice that your orchid isn’t receiving enough hydration at the roots.

Orchids can be salvaged even if the roots have died, but it takes patience.

Wilting blooms are a common sight at the end of a blooming cycle. Most orchid species will only produce blooms once per year (twice at most).

After anywhere from a week to six months, those blooms will naturally start to wilt and will eventually detach from the plant and fall off.

However, if they start to wilt and wither before even opening, a common issue called bud blast is the likely culprit. Stressed-out orchids may drop un-opened buds to conserve resources.

Orchid leaves that are dark green are not getting enough light. Very light-colored green leaves can indicate sun damage.

Adjusting the light source and proximity (orchids prefer indirect light) can address this issue, although it will take some time to see the results.

7 thoughts on “How To Fix Wrinkled Orchid Leaves”